여행의 끝
기한 없음
세비야 모험가조합
It is completely surprising that one can reach all the way to the Pacific Ocean! However, the Scholar does have one more request. It's to investigate the land that Magellan arrived at after passing through the Pacific Ocean. What do you say?
580,000
55,000

1. Where Magellan landed
I'm sorry to keep imposing on you. But I would like you to investigate the last island where Magellan is said to have landed. I want to know what he did there and what remains of his stay... If you go to Manila, which is quite close to the place where he landed, I'm sure you can make good progress in your investigation. Good luck.

2. First spread religion
Magellan, you say? For a long time, Islam spread steadily through this island region. When Magellan landed here, most of the citizens had already converted. But no country had united these lands under one rule. So, first, Magellan started missionary activities here.

3. Massive conversion of 400 people
Magellan was able to convert 400 people to Christianity under Rajah Humabon, the ruler of the island to the south. Rajah Humabon, in turn, must have expected support from Magellan, but this could still be called a tremendous success. The explorer's next move, however, would throw his destiny far off course...

4. Battle with Lapu-Lapu
Magellan then made a demand to the chiefs of the surrounding islands to recognise him as their king. But, naturally, they could not accept as their king someone from another religion who had just sailed there all of a sudden. In that same time, Magellan engaged in battle with Lapu-Lapu of Mactan Island, who was one of the chiefs who opposed him.

5. Magellan's end
In the battle with Lapu-Lapu, Magellan was struck by a poisoned arrow and died from the wound he received. His goal had been to arrive in the Spice Islands by sailing westerly around the world, and then return to the Spanish mainland. Surely, he wasn't supposed to acquire status or carry out missionary work in this region.

6. Glory to his men
Ironically, the person who carried on Magellan's mission was Juan Sebastian Elcano, who had once tried to commit mutiny against him. Miraculously, Elcano returned to Spain in the sailing ship Victoria, which had been ravaged by the long sea journey. The honour of circumnavigating the globe was then conferred to him.

7. Land where footprints remain
In the end, Magellan failed to fulfill his dream of seeing the Spice Islands and returning to his homeland. But he did succeed in passing through intricate straits and crossing over the vast ocean. I'd definitely say he was a man of ability.
Oh, the island where he conducted missionary activities is to the south of here. You should have a look.

8. Journey's end
After arriving on the island south of Manila, Magellan battled Lapu-Lapu, chief of Mactan Island, and was killed. The honour of circumnavigating the globe was given to his subordinate Elcano, but, without his supervision, such a feat would probably not have succeeded. Investigate the island south of Manila where many of his final footprints remain. Then supplement your report. 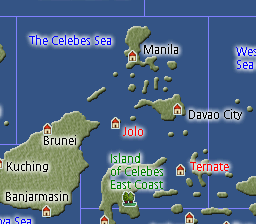